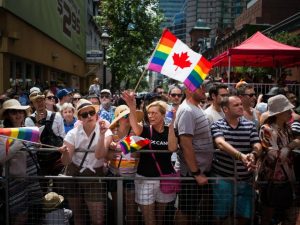 The float, which is run by a gay activist group of Middle Eastern origin men and transgenders named Cirque de So Gay, took part in the Vancouver pride parade in 2011. The activists applied for a place in this year’s pride parade but were denied by organisers, who told them that the float could be seen as “culturally insensitive”, the Vancouver Sun reports.   END_OF_DOCUMENT_TOKEN_TO_BE_REPLACED