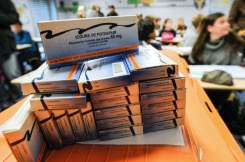 BRUSSELS – Belgium is to provide iodine pills to its entire population of around 11 million people to protect against radioactivity in case of a nuclear accident, the health minister was quoted as saying Thursday.

The move comes as Belgium faces growing pressure from neighbouring Germany to shutter two ageing nuclear power plants near their border due to concerns over their safety.

Iodine pills, which help reduce radiation build-up in the thyroid gland, had previously only been given to people living within 20 kilometres (14 miles) of the Tihange and Doel nuclear plants. Source