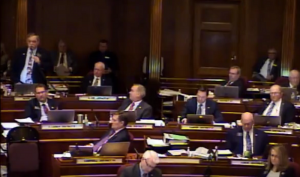 After the House passed a repeal of North Dakota’s blue laws – the prohibition on some types of retail sales on Sunday mornings – I expected smooth sailing in the state Senate. The Senate, after all, is typically perceived as being at least somewhat less socially conservative than the House.

Boy was I wrong.

The bill – HB1163 introduced by Rep. Pamela Anderson (D-Fargo) – failed on a 22-25 vote though it was hardly a party-line affair. As you can see from a roll call printout a friendly SAB reader at the capitol sent me, there were plenty of Republicans and Democrats on each side of this issue.

From the opposition, there was a lot of talk about religion.

“Man was not made for the Sabbath, rather the Sabbath was made for man,” Senator Robert Eberle (R-Lehr) told the floor in remarks attributed to Jesus. He went on to call the desire for Sunday sales “selfish consumerism.”

Senator David Clemens (R-West Fargo) said North Dakotans should “use that time to go to worship” or be with their families. Senator Diane Larson (R-Bismarck) echoed those sentiments.

But the most bizarre comments came from Senator Dick Dever (R-Bismarck) who went on a lengthy rant about atheism.

He called atheism a “belief system” which adheres to the “humanist manifesto.” Which may be true for some atheists, but certainly not all.

Not this atheist, anyway.

He also said that atheists are trying to “foist” their philosophy on society by trying to “break down the family.” He accused atheists, when the sue over things like saying “god” in the pledge of allegiance, of “using the government as a tool to advance” the “faith” of atheism.

He then went of into a tangent about creationism.

Dever appeared to answer his own question in another part of his diatribe. He said humanists encourage teachers to use “a classroom instead of a pulpit” to spread their belief system.

What any of that has to do with Sunday openings I have no idea. The idea that the push behind this bill is some sort of atheist/humanist plot is a bit ridiculous. I suspect that most of the people who support the change are people of one faith or another who just happen to think that business owners should get to decide for themselves when they might want to be open.

I’m told that there may be an effort to reconsider the bill on the Senate floor. That’s what happened in the House earlier this session when the bill initially failed there. How successful that effort will be I don’t know, but I’ve already spoken to one supporter of the legislation who is promising to put the issue on the statewide ballot if the bill dies in the Senate.