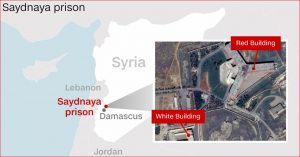 Human slaughterhouse: Mass hangings and extermination at Saydnaya prison, Syriaalso shows that the government is deliberately inflicting inhuman conditions on detainees at Saydnaya Prison through repeated torture and the systematic deprivation of food, water, medicine and medical care. The report documents how these extermination policies have killed massive numbers of detainees.  END_OF_DOCUMENT_TOKEN_TO_BE_REPLACED