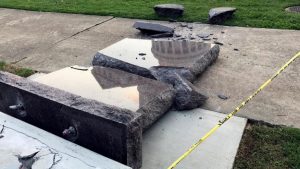 A spokesman for Arkansas’ State Capitol Police confirmed Reed’s arrest to NBC News, adding that the granite tableau had been “shattered” in Wednesday’s incident.   END_OF_DOCUMENT_TOKEN_TO_BE_REPLACED