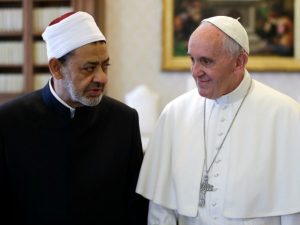 First and foremost his “mission of peace” has absolutely nothing to do with actual peace. In fact, when speaking of the beast in Rome it states clearly in Daniel 8:25, “And through his policy also he shall cause craft to prosper in his hand; and he shall magnify himself in his heart, and by peace shall destroy many: he shall also stand up against the Prince of princes; but he shall be broken without hand.” Every Pope of the Roman Catholic church, and especially a Jesuit Pope who took an oath to kill innocent people in the most violent manner imaginable simply because they’re not “Catholic” are in fact, hands down the most evil men ever to breathe air on planet earth with one exception; that being of course Judas Iscariot who betrayed our Lord.   END_OF_DOCUMENT_TOKEN_TO_BE_REPLACED 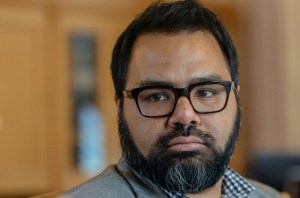 Maher said wiping out Christians, in particular, is a “very important part” of IS’s ideology. He said that although they were “religious amateurs” with “weak theology”, their claim to have restored the Caliphate – by appointing Abu Bakr al-Baghdadi as “God’s representative on earth” – has given them a strong position, which leaves other Muslims with a choice: reject that claim or to “do whatever he says”.  END_OF_DOCUMENT_TOKEN_TO_BE_REPLACED

ISIS is celebrating the Muslim holy month of Ramadan with multiple massacres. ISIS’s followers are heeding the message released by ISIS’s spokesman, Abu Muhammed al-Adnani, before Ramadan began. Jihadists must attack to “gain the great reward for martyrdom in Ramadan,” he declared. ISIS looks to the example of Prophet Muhammad himself who defeated his enemies in Mecca in the Battle of Badr, which took place during Ramadan.

END_OF_DOCUMENT_TOKEN_TO_BE_REPLACED

Islamic State terrorists have beheaded a 4-year-old girl in the group’s Syrian stronghold of Raqqa and forced her mother to soak her hands in her daughter’s blood, an Iranian news outlet has reported.

A Syrian woman who recently escaped the wrath of IS (also known as ISIS, ISIL and Daesh) told the Tehran-based Al Alam International News Channel on the condition of anonymity about a terrifying incident that led to the decapitation of an innocent child.

“A mother told her 4-year daughter to go home and she refused and then the mother told her unintentionally ‘go home and I swear to God that I will behead you if you don’t,'” the woman recalled. “And one of the ISIS members heard this and told the mother ‘since you swore to God you should behead her,’ but the mother strongly opposed.” Continue reading…

First published in May 2015, this article reveals not only that the ISIS is a creation of US intelligence, it  also confirms that the Caliphate Project was designed in Washington.

“… there is the possibility of establishing a declared or undeclared Salafist Principality in eastern Syria (Hasaka and Der Zor), and this is exactly what the supporting powers to the opposition want, in order to isolate the Syrian regime …. ” (Washington Blog)