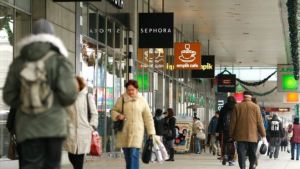 “Free Sundays are what all Catholics, non-Catholics and non-believers need,” Archbishop Stanislaw Gadecki told Polish Radio ahead of a meeting of the Bishops Conference on Friday, which is expected to support the ban. The idea was put forward last year by the powerful Solidarity trade union, backed by a million-strong petition, and has been batted back and forth in a parliamentary subcommittee ever since. The clerics are careful to base their argument on quality of life rather than religious grounds. “Families don’t just need financial support, they need time for themselves,” said the Archbishop of Katowice, Wiktor Skworc.” –Source

I just got word from a brother in the faith that lives in Poland that they plan to enforce the ban starting January 1, 2018. And no, this is not yet the enforcement of the mark of the beast. But it is a major stepping stone in that direction. As we just saw in a video I just made and then posted on YouTube yesterday titled, “1 Million to pray Rosary on Polish Border,” as prophesied, Rome is doing all they can to normalize Paganism in the minds of billions of people so as to make Catholicism to appear as moral when in fact it is not. Having millions openly pray using Pagan prayer beads in public to having the entire nation of Poland to close their businesses on the ancient day of worship for the Pagan Sun god Baal is nothing more than a show of force on Satan’s part. He knows his time is short and at the same time he knows he has most souls in his camp. So just as in Noah’s day, most will believe the lies over the truth. And for those of you that think you would never agree to embrace Pagan rituals as the norm, you need to double check your current holiday activities a bit more. Not only has Rome moved all Christian churches to keep Sunday holy, they also take part in Pagan rituals most now call Christmas and Easter.  END_OF_DOCUMENT_TOKEN_TO_BE_REPLACED