SUNDAY LAW: The one commandment that almost all Christians break, and why it matters 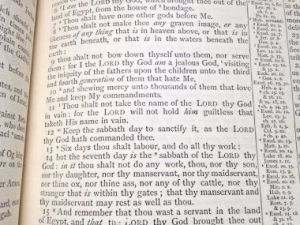 It had been a very busy time. I’d already been in Israel and Palestine for a month or so. In between volunteer shifts (I was there with the World Council of Churches) I had been taking every opportunity to meet people and see the sights.

Although there is a wonder about that place, there’s also a sadness. For every inspiring historical site, there’s another contemporary situation that breaks your heart.

So it was in a state of some tiredness that I came woke early in my apartment near Ramallah in Palestine, headed through the misery of the Qalandiya checkpoint and up into the north of Israel.

I was to be staying for the weekend at a Kibbutz near Nazareth. This was an unusual enough experience in itself but I was also going to be there throughout Sabbath, staying with an observant family.

Soon after I had arrived on Friday afternoon, it became clear that preparations were well underway. Food for the evening was bubbling away on the stove and soon, the phone began to ring with regularity. Family and friends were making last-minute arrangements before the sun set and all phones would be put away for 24 hours.

And then it came. Shabbat was upon us. The Rabbi with whom I was staying took me along to the Synagogue and I did my best to follow the service. Back at home the table was groaning under the weight of a marvelous meal which I enjoyed to the full. We talked late into the night and I slept well.

With no phone to wake me up, I relied on the family’s young kids to do the job and soon we were back in the Synagogue watching the Torah scroll being unrolled and read. After the service and back home, another wonderful meal was served while friends and family descended on the home.

With no work to be done, we fell into interesting conversations. Politics, theology and all the other things you’re not supposed to talk about at the dinner table were up for grabs.

And then, as surreptitiously as it had snuck up on me, the Sabbath was over. It was winter, so the sun had set early. Even though it was now allowed, I didn’t feel especially keen to reach for my phone. The space for rest, contemplation and conversation that the Sabbath had created was something I didn’t want to flee from.

We had worshipped, eaten and had fellowship without any risk of interruption from the outside world. Even my regular stream of emails back home would have to wait. It remains one of my favourite memories of a memorable few months spent in the Holy Land, getting to know the customs and land of Jews, Muslims and Christians; Palestinians and Israelis.

This weekend comes back to me every now and again when my busy life in London seems to get a little too much. On those days when I’m almost paralysed by the to-do list, the email inbox(es), the text messages, Whatsapp chats, and all the rest.

When those methods of communication crowd in on me, I think back to that wonderful example of Shabbat that I witnessed. It wasn’t an exercise in ascetic self-denial. It was a way of reconnecting with the important things in life: God, family, friends, food and community.

One thing I will never understand is why Christians (me included!) seem to have relegated the commandment to keep the Sabbath holy to a secondary idea.

Exodus 20 is pretty unequivocal: “Remember the Sabbath day, and keep it holy. For six days you shall labour and do all your work. But the seventh day is a Sabbath to the Lord your God; you shall not do any work.”

There doesn’t seem much wriggle room. Don’t work. Don’t attend to those emails. Don’t make endless phone calls and so on.

After this piece is published I will get tweets telling me that the Church has gone astray and the original Sabbath was a Saturday. As far as I can tell, that completely misses the point.

God doesn’t care if we mark a Sabbath on the Saturday or a Sunday. It matters that we have a day of rest – and as far as possible we have a common day of rest. Sunday is the agreed day in our culture. That’s one of the reasons I’m a passionate advocate of restricting Sunday shopping hours. Protecting a common day of rest for shop staff and their families is vital.

But didn’t Jesus do away with the importance of the Sabbath? Not at all.

Jesus did heal on the Sabbath, and allowed his disciples to pick and eat grain. This angered the religious leaders of his day. Jesus then showed the real purpose of the Sabbath. Instead of being an arbitrary rule, designed to catch people out, it was their for the rest and recuperation of people. “The Sabbath was made for humankind, and not humankind for the Sabbath” he says in Mark 2.

This isn’t Jesus’ way of minimising the Law. Instead it’s his way of upping the ante. He’s challenging the idea that the Pharisees held that upholding the rules was the only way to please God. Instead, Jesus shows that we are all made in the image of God, that God cares about our wellbeing and that the Sabbath is there to ensure that wellbeing, to reconnect us to God and to our neighbours.

In the 21st Century it’s a challenge, but surely one we have to accept? Yes, work can be all-consuming but we have to draw a line. I’ve been inspired by an atheist acquaintance whose auto-reply proclaims to anyone who emails him between sundown on Friday and sundown on Saturday that they’re going to have to wait for a reply – he’s observing what he calls a ‘digital Sabbath’.

It’s time we remembered this often-ignored commandment in the midst of our busy lives. It’s there for us – if only we’d give it the chance…