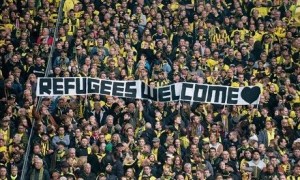 Francis Saturday spoke to alumni of Jesuit schools in Europe who were in Rome for a conference on refugees.

The pope said: “I encourage you to welcome refugees into your homes and communities, so that their first experience of Europe is not the traumatic experience of sleeping cold on the streets, but one of warm welcome.”

He said each refugee “has a name, a face and a story, as well as an inalienable right to live in peace and to aspire to a better future” for their children.

“At this place and time in history, there is great need for men and women who hear the cry of the poor and respond with mercy and generosity,” the pope told a group of Jesuit alumni Sept. 17.

He noted how there are “tragically more than 65 million” forcibly displaced persons around the globe, calling the number “unprecedented” and “beyond all imagination.”

“The displaced population of today’s world is now larger than the entire population of Italy,” he said, but cautioned that beyond the statistics, each refugee is no different from our own families.

Pope Francis spoke to members of the European Confederation and World Union of Jesuit Alumni and Alumnae present in Rome for a Sept. 14-16 conference titled “Global Migration and Refugee Crisis: Time to Contemplate and Act.”

Throughout their conference, the group was accompanied by the Jesuit Refugee Service, which was founded in 1980 by Fr. Pedro Arrupe, superior general of the Jesuits while Pope Francis was a young priest.

In his speech, the Pope noted how more than 35 years ago Fr. Arrupe intervened on behalf of Vietnamese boat people in the South China Sea who were suffering from pirate attacks and violence in their homeland.

“Sadly the world today still finds itself embroiled in countless conflicts,” he noted, adding that “the terrible war in Syria, as well as civil conflicts in South Sudan and elsewhere throughout the world, can seem irresolvable.”

Meanwhile, as war “rages” throughout the world and record numbers of refugees continue to die trying to cross the Mediterranean or spend years “languishing” in camps, the Church, Francis told the group, “needs you to draw on the bravery and example of Father Pedro Arrupe.”

He urged them to go back to their Ignatian roots as they face the problems experienced by refugees, offering the Lord “all your liberty, your memory, your understanding and your entire will” in serving refugees and understanding the root causes of forced migration in each of their own countries.

“I urge you to draw on the joys and successes that your Jesuit education has given you by supporting the education of refugees throughout the world,” the Pope said, pointing to the “disturbing truth” that less than 50 percent of child refugees have access to primary education.

Further, Pope Francis noted that only 22 percent of adolescents are enrolled in secondary school, while less than 1 percent of refugees have access to a university education.

Francis urged the Jesuit alumni to “put your mercy in motion and help transform this educational reality” in order to build “a stronger Europe and a brighter future for refugees.”

Pointing to the Holy Year of Mercy, the Pope stressed that together with the Church, the group would be able to better respond to the “human tragedy” of refugees through concrete acts of mercy which promote their integration not only into Europe, but any culture they move to.

“So, I encourage you to welcome refugees into your homes and communities, so that their first experience of Europe is not the traumatic experience of sleeping cold on the streets, but one of warm human welcome.”

Although it can at times seem like we’re alone when it comes to putting mercy into action, Francis assured the group that they have the support of the various ecclesial organizations and humanitarian causes dedicated to serving the marginalized and excluded.

“Yet more important, remember that the love of God accompanies you in this work. You are God’s eyes, mouth, hands and heart in this world.”