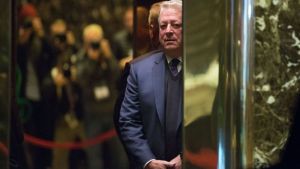 All three of Mr Trump’s adult children are serving on his transition team.

Anyone who had Donald Trump sitting down with former Vice-President Al Gore among their post-election predictions, please raise your hand.

The meeting may not be the strangest thing that has come out of the Trump transition process. (That honour has to go to the Naked Cowboy’s appearance in a Trump Tower elevator last week.) It is, however, an unusual development.

Ivanka Trump appears serious about taking on climate change as one of her “signature issues” – and anyone who has her ear also has a direct line to her father.

Mr Gore assuredly made his best case for continuing Barack Obama’s efforts to address climate change. But will it make a difference?

Mr Trump has been stocking his administration with conservative ideologues, and many of the possible names for his environmental posts are sceptical of current policy. If Ms Trump pushes the issue and Mr Gore continues his “extremely interesting conversation” with the president, however, this could become a test of how willing President Trump is to cross party orthodoxy.

A free-agent president – beholden to neither party and willing to strike deals according to his own fancy – may be exactly what his voters wanted and what Washington insiders fear.

Mr Gore told reporters he had met Ivanka before his meeting with her father.

“The bulk of the time was with the president-elect, Donald Trump. I found it an extremely interesting conversation, and to be continued,” Mr Gore said.

After leaving the White House in 2001 Mr Gore became an outspoken advocate of finding a solution to address climate change.

In 2006 he starred in the documentary An Inconvenient Truth, which has been credited for raising global awareness.

Ivanka Trump is perceived to be a more progressive voice on her father’s transition team, compared to his other advisers.

In the weeks after Mr Trump’s surprise election win, New Yorkers posted “Dear Ivanka” messages on social media and outside a Manhattan building owned by her husband, Jared Kushner.

Many notes appealed to her to prevent her father from rolling back US climate change pledges, including the Paris agreement, which was signed earlier this year at the United Nations in New York.

Environmental groups did not immediately cheer the news of Ms Trump’s environmental interest.

“From the start of Trump’s presidential run we’ve seen his team use Ivanka to soften her father’s most egregious positions, and there’s no reason to think this isn’t part of the same plan,” Travis Nichols, a spokesman for Greenpeace, told EcoWatch.

Ivanka Trump and her husband have also reportedly been house-hunting in Washington DC, leading some to speculate that she will continue to serve her father in a political role.

Earlier on Monday, Mr Trump announced that former rival Ben Carson will serve as his Housing and Urban Development secretary.

The former surgeon, who has no experience in government, is Mr Trump’s first African-American nominee.

As questions remain over what role Ivanka Trump will have, her father has faced intense criticism over potential conflicts of interest he will encounter once taking over the White House.

He has scheduled a speech for 15 December, which he announced on Twitter will be about “leaving my great business in total in order to fully focus on running the country”.