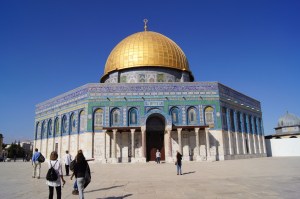 “First and foremost, for WorldNetDaily to post a PDF file from a Jewish Professor who most likely sets the stage for the Jesuit theology about a 7 year tribulation is in fact par for the course for WND. The only reason I use them on a regular basis is that they tend to have somewhat of a Christian slant to their reporting which allows for better sources on some articles, and combating their false theology regarding a secret rapture to an Islamic Antichrist is child’s play in the hands of any obedient student of Bible prophecy because being obedient means the Author of those prophetic facts will reveal the truth unto us. But, the only reason I post this article about Jews, Christians and Muslims supposedly agreeing on the Temple location is because of the timing of it all. What I mean is, any student of prophecy can tell you they are starting these talking points just prior to religious laws being legalized in the USA. This all plays into the long declared agenda of Jesuits regarding a nonbiblical seven year tribulation which if successful in pulling they will no doubt make plans to disrupt within 3.5 years so as to make their agendas appear prophetic.

What am I talking about?

All Jesuit educated as well as some innocent but deceived false prophets of today twist a prophecy of Daniel chapter nine (specifically Daniel 9:24-27) wherein they claim Daniel’s reference to the sacrifice and oblation ceasing means a physical temple must be present for that to be set up since they claim his prophetic utterance was for the end of days. Problem is, unless you obey the God of the Bible, and this includes obeying His Ten Commandments, then the Author of those prophecies declared long ago that you nor anyone you teach will be able to see or even decipher the prophecy He pens.

The Jesuits, who are now confirmed devil worshipers with a bloodthirsty agenda were moved by their dying God to twist the prophecy of Daniel so as to #1, hide the bloody facts about the great tribulation already performed by the Popes of Rome during the Inquisitions, #3, hide the identity of the real Antichrist as well as #2, corral as many lukewarm Christians into deception with them so as to please their dying god Satan in the end wherein they believe he will reward them greatly for doing so.

The prophecy of Daniel 9:24-27 in a nutshell is not about a futuristic Antichrist or seven year tribulation. It’s not even about a 3.5 years tribulation either. The prophecy is in the midst of a massive 2300 year prophecy (see my timeline on this) and so can in no way be removed from that prophecy to be placed at the end of the world. But, most people don’t study prophecy and so they have no clue what the Jesuits did here. That prophecy does not speak of an end time event in any way shape or form. It’s actually one of the most amazing and love filled events ever prophesied! It speaks of the time that Jesus was to come as Messiah!

That period of time that students of prophecy call “the week of Daniel” is a seven year period in Bible history. Just so you know, the Bible declares prophetic time is to be one day for each year in prophetic utterance. (See Numbers 14:34 & Ezekiel 4:6) That “week” in prophecy, which we know was a seven period, actually began the very moment Jesus was baptized in the Jordan. Then exactly 3.5 years later as the prophecy predicted, Jesus was “cut off” or hung on a cross for all of mankind. When He died for us that temple vail ripped in two signifying the “sacrifice and oblation” ceased when Jesus said “it is finished” on that cross. But Rome is home to the real Antichrist and Satan must get all the world to wonder after her lies to keep the truth hidden and so most today believe there will be a seven year tribulation and before that time period begins there must be a third temple built. Hence the reason “Jews, Christians, and Muslims” supposedly agree on its location as this article claims.

Strangely enough, all that believe in this so called seven year tribulation call themselves Christians. But at the same time they claim we need to rebuild the Jewish temple and restart the temple sacrifices to have our sins forgiven. That means all of these Christians are being moved by Satan to proclaim the sacrifice Jesus already performed on that cross 2000 years ago when the temple was actually standing was insufficient and THAT is the main reason Satan set up this grand delusion. How he gets there doesn’t matter to him at all. All he wants is for the people to declare a need for that temple as well as a need to offer a sacrifice for their sins because the enemy of souls knows when they do that it means they are declaring Jesus is not the Messiah.

If you want more detail on how this all goes down according to Christian prophecies matched perfectly to already confirmed historic records proving the Jesuit claim that the prophecy speaks of the end of times instead of the time Jesus came 2000 years ago, click here. The seven years or “week of Daniel” has already been confirmed by obedient Bible students to have started way back in the Autumn of 27Ad. Jesus was then crucified in the Spring of 31AD exactly 3.5 years later or “in the midst of the week” as Daniel put it, and because Jesus told the Apostles to concentrate on preaching to Jews for another 3.5 years after the cross, we saw the first Christian martyr was stoned in the Autumn of 34AD exactly 3.5 years later therefore finishing the week of Daniel which then sealed the long prophesied fate of the nonbelieving Jews that stoned Stephen that day.

The week of Daniel has come and gone. There is no seven year tribulation, there is no secret rapture, and the Popes of Rome are indeed the prophesied Antichrist of Scripture and have been for nearly 15 centuries, and the Jesuits are their demonic henchmen that will commit the most gruesome crimes to both please their Pope as well as glorify their dying god. And yes, the Jews have already begun the work of building that third temple as we speak. No, this was not prophesied by the God of the Bible for there is no need for a third temple. It is nothing more than an agenda of the man of sin in Rome who has had control over the Jews for a few years now to garner as many souls into hellfire with him.

That all being said, if the Lord tarries in His coming a few more years, watch for Rome and Israel to actually break ground for that third temple. If they are successful in doing so, they will also fabricate a false contract for seven years of peace with the plan to disrupt that peace in exactly 3.5 years just so they can glorify the false prophecies of the Jesuits to make them appear as valid to the many souls on earth that don’t study prophecy. But here is where the elect cannot be deceived. The Bible is the only source of the truth. NOT ROME! Even if what a liar declares to come does in fact come to pass, it doesn’t make it worth embracing for if it goes against the written Word of our God, then it is not for the child of God. Rome uplifts Pagan doctrine, they teach billions to break God’s law each week on Sunday, and they even kill, rape, molest, steal and start wars to push their political agenda. The prophecy of a loving God would NEVER be revealed to a disobedient man of sin nor even to his god of hate! PERIOD! For it is plainly written in Isaiah 8:20, “To the law and to the testimony: if they speak not according to this word, it is because there is no light in them.”

So.. as the old saying goes. When Rome, or anyone in bed with her preaches, teaches or prophesies, CONSIDER THE SOURCE!