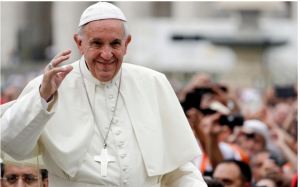 Since he came into office, and yes I said office and not the church because the Vatican is not just a church structure. It is first and foremost a political entity, a literal nation on its own. It is a church and state as prophecy predicted and being as such the man of sin in Rome has the ability to destroy people lives in both the physical and spiritual spectrum. So we must always expect him to lean towards whatever will benefit the Vatican most and their long prophesied agenda towards the enforcement of the mark upon every disobedient soul on earth because I’ve never heard this Pope or any other Pope ever actually say anything that would spiritually bless any soul on earth. And yes, that is a biblical fact for it is also stated in James 3:10, “Out of the same mouth proceedeth blessing and cursing. My brethren, these things ought not so to be.” And as we know, every Pope has claimed to echo Scripture while at the same time preaching Paganism which if embraced curses the soul with damnation.

That all being said, since he was elected by his exceptionally corrupt cabinet of prelates with a centuries old method of fixing the outcome, have we ever heard him preach a sermon on a global scale regarding the need of all of mankind to seek Christ Jesus as Lord and Saviour so as to escape the damnation headed their way due to the many sins of the world that entail everything from homosexuality to drunkenness? After all, mankind has been crying out for deliverance from such things for eons. No, like all the Popes before him you have not heard him use the largest modern day pulpit available on this planet to preach Christ crucified. Instead of doing as all Christian that truly do obey Jesus would do if they had the same audience to proclaim the Gospel message, he chooses rather to pander to and literally promote homosexuality, same sex marriages, alcohol consumption, euthanasia,  illegal immigration, Islam, rape, redistribution of wealth, Socialism, belittlement of Christ’s death(TWICE on camera) communism, ecumenicalism, Sunday laws, removal of sovereignty for all nations, abortion, Mary worship and evolution just to name a few of the many that come to mind. And as I was looking for the articles and such to show I am not kidding in regards to his true message, I ran across some Catholic monks that I heard about years ago that have listed their disgust for the last few popes in writing. In other words, even the Pope’s own ordained monks expose him and his predecessors as being very evil men.

So why is it the Pope speaks volumes on things that entice and excite the worldly among us instead of sharing Jesus who will help them find the peace they are searching for? It’s because the Popes of Rome truly are the prophesied man of sin. And since they are all about the world they worship, it’s only fitting that when Satan needs them to help him enforce his mark upon the people of the world that seeing how the Popes worship the world over and above the Creator of it as Romans 1:25 predicted, the climate change agenda was a no-brainer for Satan to use o help puff up the one man on earth who represents just how far Satan can get any soul that obeys him into loving all that the world has to offer. And so instead of hearing any Pope urge the world’s leaders to “hear the cry of the lost” so as to gain many souls for Heaven as is the duty of every real Christian, this Pope like his predecessors urges leaders to “hear the cry of the earth” just as any real Pagan does and has done since they started dancing under every green tree in the hills since time began. Look in your Bibles to see how this angered the Lord in Deuteronomy 12:2 as well as many other areas of the Word. They have been doing this ever since Satan was cast to this earth.

Now yes, I expect some Catholics to email me a homily or two from the present Pope wherein he does mention Jesus Christ and salvation on occasion. In fact I welcome and even implore you to send me that sermon if you can find it. For I am sure, as I was once Catholic 3 decades ago, and I know for fact how Catholic sermons are written. If you allow me to do so I will show you what you send isn’t actually a sermon at all. It is a Vatican promotional speech seeking to both fill the pews as well as keep them warm with souls that refuse to open Bibles to discover their Pope is openly lying to them. And so, email me that sermon and I will do all I can to place the truth back in context for you so as to help you see you need to “Come out of her, my people, that ye be not partakers of her sins, and that ye receive not of her plagues.” -Revelation 18:4.

And yes, Jesus called you “my people” in that passage. But also keep in mind that you are only considered “my people” when you obey Him to the best of your ability as well as in the expectation that you will obey Him as Lord once more and literally COME OUT.