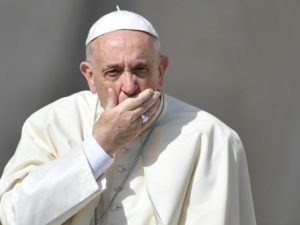 As most of you that frequent my main site know, I have posted hundreds of articles and websites that compile thousands more articles regarding the crimes of the Roman Catholic church. See that page here. But if you read the article regarding the grand jury report you will find some very graphic and morbid methods the Catholic church used to help the child rapists escape prosecution. As they did with the Nazis in the Vatican ratline, they made sure the priests would be relocated to areas no one knew about their previous crimes and so they could continue on in their sinful ways.

I also have a section on my RCC & SEX page that shares articles about how most Roman Catholic priests around the world are in fact homosexual and the Vatican prelates were recently outed as 98% homosexual, but that truth has been just as hidden by the Popes of Rome as were the millions of children that have been raped and killed by the Vatican priests over the centuries. But what irks me the most is that all of this was prophesied and not a single reporter and only a very small handful of preachers ever even talk about it.

When the prophet Daniel was describing the man of sin in the Vatican in the 11th chapter of his book he stated in Daniel 11:37 that he “Neither shall he regard the God of his fathers, nor the desire of women…” Yet next to no one on the planet is aware of that because as also prophesied, all the world wonders after the beast and the agreements they have with the Pope in his ecumenical movement forbids them to speak out against their duly elected one world church leader, the Pope. And the basic reality in all this is that 100% of all these pedophiles in the church of Rome are in fact homosexuals just as the prophet Daniel prophesied they would be.

Besides the fact that every politician on earth bows in worship before the Popes of Rome on and off camera as prophecy predicted they would do, or the fact every News outlet and most church leaders today blaspheme the God of Heaven by calling the Pope “Holy Father“, or the fact the Popes control and even protect the largest known organized group of child rapists on the planet and this article proved once again, or that everything from the murder of Vatican bankers to actual devil worship being discovered in the Vatican by many eye witnesses; have you ever heard of a Pope being jailed for any of these crimes? No, never. And this is the norm for the Popes as they have been documented as doing such crimes for many centuries and since Daniel the prophet also predicted the Popes would know how to use the craft and even embrace dark sentences of the devil, (See Daniel 8:23, 25) not only do they escape prosecution, they are uplifted by their political pawns as the only moral authority on earth. And so it is fitting that the report of the Grand Jury of Pennsylvania would in fact declare the church of Rome to be a criminal syndicate.

And by the way, that means one more prophecy has been fulfilled here. That being the one proclaimed in 2 Thessalonians 2:3 that when speaking of the return of Jesus Christ it says “Let no man deceive you by any means: for that day shall not come, except there come a falling away first, and that man of sin be revealed, the son of perdition;”

In other words, before Jesus returns, the Popes of Rome will be exposed by the obedient remnant church so as to help the souls still trusting the Pope to see the need to sever all connections with the Pope. And keep in mind, Pennsylvania is just one State. There are thousands of these pedophile priests in all the cities in America and tens of thousands strewn all over the planet. And now that Jesus is about to return, most people alive today know for a fact that the Popes of Rome are indeed the prophesied man of sin.

And yes, for those looking a tad deeper into this prophetic fact. One of the main reasons Antichrist will arrive soon to stand next to the Pope so as to help him cover-up his current scandals by using the blatant deception of Satan himself claiming to be Jesus Christ on earth. It’s gotten so bad for the Vatican now that they literally need their dying god to make his long prophesied appearance to prevent them from losing the religious and political power they have killed hundreds of millions to attain over the centuries. But, that power will be very short lived when that day comes. Because Jesus Christ Himself will put an end to the Pope and all those that have bowed to him and his counterfeit Jesus.