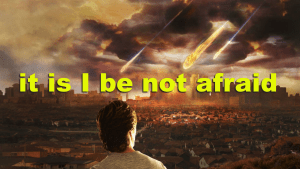 UPDATE:  The enemy of souls did all he could to stop this video from being made or even posted online. It’s actually of a  sermon I shared on July 14 of this year. (listen to the original audio version here) I cannot post a long explanation about the topic of the video as it’s 22 minutes long and that would make for one huge blog entry. Suffice it to say, if you are a Christian that has any fear whatsoever regarding what’s right now happening in the world all around you, this video sermon that I posted to YouTube on Friday may help you.

This was one very difficult video to get posted! Not too long after I was moved by the Lord to make a video using the sermon audio. As I was contemplating this, and as usual I was praying on it, the Lord sent confirmation unto me regarding His will for the video via some that were blessed by the sermon. And so I decided to do the video on the sermon. But my PC was unable to handle the workload effectively of a 22 minute video as I usually do much shorter ones. I knew I had to upgrade the RAM and the GPU in my system so I started that process. Everything seemed good once the new peripherals arrived and I installed them. I then got to making the video immediately. But then I found that the audio of the sermon was corrupted after I tried converting it to a useable format for my video editor. It was totally unusable.

I was left with no choice but to re-record the sermon using better audio software. After doing so and after editing it for a few hours I converted it to MP3 and imported it into my video editor. The RAM and GPU worked well and I had no issues with the video editing UNTIL I encoded it. It seems the new audio software encoded the MP3 file in a way that did not work well with the way my video editor encodes video and audio together. What usually takes me 5 to 8 hours to make a video was now into its second full day of work. And so I re-encoded the video using every option known to man to remove the issues, and still the audio anomalies remained. There were gaps all over the place. I even contacted my video editing software’s tech support and after 24 hours they couldn’t find a way to fix it. It appeared I had to re-record the entire sermon again to try and get this video done. But that would mean another day of editing the audio and then another day of re-editing the pics to make sure they matched up with the new audio on que. So, into prayer I went again.

After praying I found that the video editing software actually preferred WAV files and so I converted the MP3 I just made to WAV with the new software and it worked! BUT, in so doing it deleted the last 8 seconds to make up for the gaps. But I needed to have those last 8 seconds in there and I then noticed the conversion process jogged the entire timeline up and down a few seconds here and there. And so, I prayed again and it dawned on me that I could clip the last 8 seconds of the MP3 to try converting that into small section to WAV format and that worked well. So I tacked it unto the end of the audio file in the video and finally I was able to encode the entire video with the audio intact. But, I still had to reposition every single pic and text I placed in the video up a second or down a second to make sure it was all in sync. It finally was, but now the sound quality suffered just a little bit because of converting it from MP3 to WAV. But it was good enough as far as I could see and so I posted it online.

It usually takes me 5 to 8 hours to make a 3 to 7 minute video, and yes I expected this video take longer due to its length of 22 minutes. But from the day the Lord moved me to make the video, to the day it was finally posted on YouTube was well over 2 weeks due to also waiting on the RAM and GPU upgrade that was shipped late to the point of me being refunded the shipping costs. That all being said, I pray this video helps those it was intended to help because the dying god of this world did everything he could to prevent the troubled soul from viewing it!