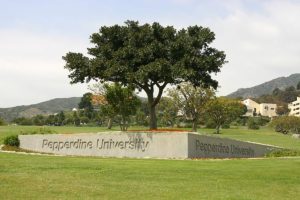 MALIBU, Calif. – A prominent faith-based university has quietly embraced the Obama Administration’s mandate on “transgender” students and will allow students to use restrooms and locker rooms of the opposite sex, as it has now withdrawn its exemption from the government policy.

Pepperdine University is a private California school affiliated with the Churches of Christ. In terms of a total number of students, Pepperdine is the largest Church of Christ-affiliated university in the U.S., with a total student body of approximately 7,500.

As a university that identifies itself as Christian, Pepperdine advertises its adherence to biblical morals.

“Founded in the Church of Christ tradition, Pepperdine University proudly upholds Christian values,” the university’s website states. “We believe these values complement and support the pursuit of knowledge.”
However, despite the school’s stated adherence to these values, it recently embraced the U.S. Department of Education’s controversial stance on “transgender” students.

As previously reported, the U.S. government in May began urging schools to allow students to use the restrooms corresponding with their “gender identity” or else lose federal funding. The guidelines are based on the Obama Administration’s interpretation of Title IX of the Education Amendments of 1972.

Although several Church of Christ-affiliated schools have requested and obtained exemptions from the controversial policy, Pepperdine has chosen instead to embrace the Obama Administration’s interpretation of Title IX. In a letter to the Department of Education’s Office for Civil Rights (OCR) earlier this year, the president of Pepperdine asked the department to nullify the school’s 40-year-old exemption.

“While the university continues to be controlled, within the meaning contemplated by Title IX, through its affiliations with the Churches of Christ, the university is committed to complying with Title IX,” Andrew Benton, the university’s president, wrote.

He seemingly did not want Pepperdine to be publicly recognized as a religious school seeking exemption from Title IX.

According to a 1985 letter from the Department of Education, Pepperdine University had sought an exemption from Title IX due in part to the school’s belief “that God approves sexual relationships only between male and female in holy wedlock” and took disciplinary action against students or employees “involved in sexual relationships outside the holy union of wedlock.”

However, in a statement this year, a Pepperdine spokesperson suggested that the school’s values have changed since that original exemption request.

“Pepperdine requested religious exemption from Title IX of the Education Amendments of 1972 in 1976, and it was granted by the Department of Education in 1985. Early this year, the university withdrew from the previously granted exemption because it does not fully reflect Pepperdine’s values today,” the statement said. “We believe that Pepperdine’s mission and the goals of Title IX are aligned, and we are committed to complying with Title IX in its entirety.”

Although Pepperdine no longer desires the religious exemption from Title IX, other private Christian schools are standing by their biblical convictions regarding human sexuality. For example, Oklahoma Christian University, another prominent school affiliated with the Churches of Christ, sought and successfully obtained an exemption from the controversial policy in 2014.

“In order for Oklahoma Christian University to be true to its founding documents and the sincerely held religious beliefs of its controlling church constituency, it must continue with the view that homosexual practice is sinful, a view which has characterized the University from its beginning,” the school’s president, John deSteiguer, wrote in a letter.